Written by Angel Coker and approved for reprint by The Tuscaloosa News. Photography by Gary Cosby, Jr.

WTI Transport, a Tuscaloosa-based trucking company, is among the giving.

It honored U.S. Navy veteran, Jessie Neal, on Tuesday for his military and community service by giving him and his family loads of food and gifts in boxes and laundry baskets, including a Thanksgiving turkey and ham. 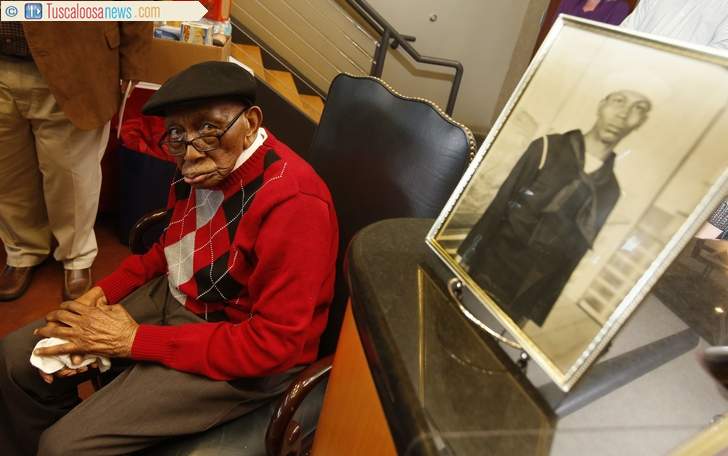 U.S. Navy veteran Jessie Lee Neal, 100, sits near a U.S. Navy portrait of himself taken during his 1944-46 term of service. Tuscaloosa-based trucking company WTI Transport honored him with food and gifts Tuesday.

Departments within the company recently competed in a food drive as a way to give back to the community. Altogether along with some donations from Save-A-Lot grocery store in Northport, employees collected 2,857 items, including canned foods, crackers, soups, water, sodas, cereal, oatmeal, box dinners and other non-perishable food items.

The company plans to divide the goods among multiple veterans and their families chosen through the VA Medical Center.

“It started off, we were going to get enough food to feed Jessie’s family, but with the holidays coming up, we’ve raised enough food for probably 20 plus families,” said WTI president Rendy Taylor.

But the company wanted to honor Neal in particular in an effort to give thanks along with their donations.

“We couldn’t ask for a better person to sponsor,” Taylor said. “During this time, the conditions of the world as we know today, has brought us closer to the people who protect us, look after us and provide us our freedoms that we have. That’s the reason veterans are so important to us.”

The 100-year-old veteran was born in Pickens County and now lives in Millport with his grandson and granddaughter-in-law. He had one daughter with his late wife of 65 years and has three grandchildren and seven great-grandchildren.

He also served as chairman of the trustee board and on the deacon board at his church, Holly Grove Baptist.

His grandson, Marion Hodge, said it was nice to have others recognize his grandfather’s service to his community and his country.

“We’re very grateful. He has definitely meant a lot to us,” Hodge said. “I think he well deserves people honoring him today.”