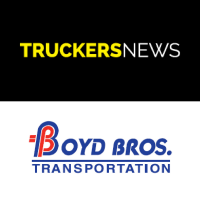 Have you ever wondered what a typical day looks like for a flatbed truck driver?

In August, Ian Palmer of Truckers News had the opportunity to hitch a ride with Boyd Bros. Transportation driver Donald Norton on his way to Knoxville from Chattanooga.

This may have been a standard trip, but Donald isn’t your average truck driver. He has been named a Boyd Bros. Transportation Million Miler, which means he’s logged more than a million safe miles during his career. He has spent more than 10 years in the trucking industry and has a wealth of knowledge to share.

Ian was able to observe firsthand what Donald experiences every day and all the work he puts into getting from one city to another. They started their journey joking about traffic but soon faced one of the most common concerns on the road: four-wheel drivers. Unlike cars, trucks have a much longer stopping distance. When trucks are cut off on the highway, they are forced to brake very quickly to avoid colliding with another vehicle.

While acknowledging that there are many frustrations for drivers, Norton says that being a professional truck driver has given him more freedom while doing what he loves. The freedom associated with truck driving has become a lifestyle for him and sharing his experiences with friends and other drivers has helped him build relationships that will last for years to come.

Read more about this story, here.