Robert Tyler thought his shift was about over. He was literally blocks away from Smokey Point Distributing’s headquarters when he encountered a slow down on the two-lane stretch of road.

“Cars in my lane were going into oncoming traffic to maneuver around a stalled vehicle,” reflected Tyler, a 30-year truck driving veteran. “When I came up upon the car, I noticed the brake lights were on, and a person slumped over the steering wheel. So I carefully passed the car and pulled over on the side of the road to see what was wrong.”

As it turned out, plenty.

The driver was unconscious, supported by his seat belt, and Tyler could see the man’s foot was resting on the brake, with the car still in drive. That meant the doors were all locked and entry was impossible. As other people came to the scene, Tyler’s first instinct was to secure the scene.

“If the man’s foot slipped off the brake, the car would take off, so I backed my tractor (he was running bobtail) up to his front bumper to keep his vehicle in place,” said Tyler. “Then I grabbed my pinch bar (used for securing loads) and broke out the rear passenger window. That allowed us to open the door. After turning off the car, I pulled the gentleman out and thankfully there was a nurse there who began CPR.”

As life-saving measures began, traffic was still gridlocked around the scene. “I called 911 to give them an update and to ensure they had the right coordinates to get here with an ambulance,” recalled Tyler. “We then cordoned off traffic and made space so the ambulance could get next to the scene.”

Within minutes, the unconscious driver, with CPR still being administered, was transported to a hospital.

“It was a hectic scene, but instincts and experience took over,” said Tyler. “I sure hope he made it – our guys at Smokey Point called the hospital but they were unable to give his condition since they were not family members.”

For his quick thinking and heroic action, the Truckload Carriers Association recently commended Tyler with its Highway Angel award, along with a letter of commendation. “That was unexpected and appreciated,” he said. “But I just did what I was brought up to do – help others in need.”

It wasn’t the first time Tyler has come to the aid of motorists. “I’ve seen a lot of accidents over the course of my career and have always stopped to assist,” he said. “Last year a women on a motorcycle missed the exit her husband had just taken so she quickly tried to make the exit, but hit a concrete jersey barrier. She went flying in the air and was hurt pretty badly. She was unconscious and bleeding badly. We assisted her and kept her on her side to keep her breathing. Her niece contacted me a few weeks later to let me know she survived.

“I know what it’s like to need others,” continued Tyler. “Many years ago I was rear-ended on my own motorcycle and crashed into a retaining wall. I was in a comafor a week and given a 50-50 chance to make it. Someone came to my aid at the crash scene, so I know you don’t think twice when you come upon someone in need.” 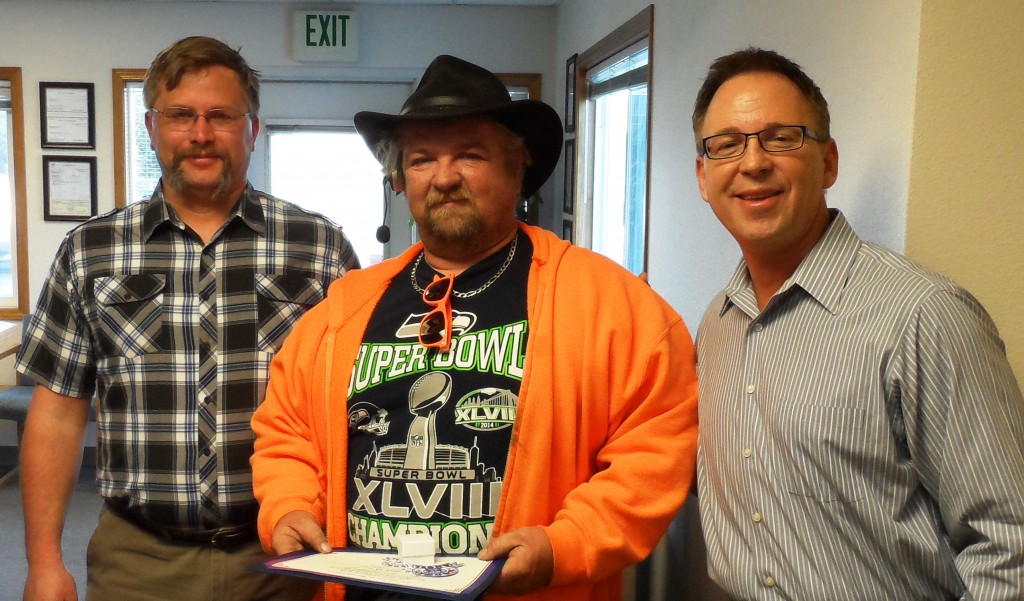 According to Dan Wirkkala, president of Smokey Point Distributing, the entire team at SPD was grateful for Tyler’s quick action. “We share the road with motorists each and everyday, so when any of our drivers can make a difference, especially a life-saving difference, it means the world to us,” he said. “We’re just so thankful that Tyler was there that day to help in a life-or-death situation. Tyler is a wonderful driver for us, but even more, he’s a wonderful individual who stepped up that eventful day.”