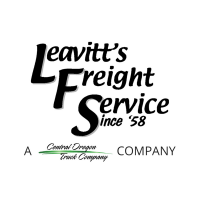 Since 1958, a truck driver has always sat at the helm of Leavitt’s Freight Service. Originally, brothers Doug, Dean and Dewey Leavitt held the wheel, transporting wood poles and laminated beams. As their business grew, they left the road for the office, driving business on the West Coast with phone calls and personal visits.

Today, this thriving company operates more than 120 trucks. And a truck driver — CEO Ron Riddle, who started with the company at the tender age of 21 — still steers the company and keeps it true to its founding principles. That commitment helps explains why Leavitt’s Freight Service continues to be the premier hauler of poles and engineered wood products in the American West.

Prior to Ron taking charge, company owners Terry Leavitt (son of Doug) and Duane Leavitt (son of Dewey) served as president and senior VP of Leavitt’s, each also having spent time in the driver’s seat early in their careers. Both retired in 2017. Now, the company is merging with Central Oregon Truck Company (COTC). And COTC’s CEO Rick Williams? You guessed it — he’s a former truck driver, too.

“There’s a shared bond between the companies. We’re both led by truck drivers who have developed successful businesses,” says Rick. “Drivers are the core of any trucking operation, and with leadership at both Leavitt’s and COTC having that experience, it differentiates us from our competitors. Trucking isn’t an easy life. But we feel we can relate better to our drivers. We know what they’re going through.”

According to Rick, merging with Leavitt’s Freight Service is a move that will significantly strengthen each operation.

“I’ve always admired what the Leavitt family has put together,” he says. “We really hit it off when we started discussing the possibilities of a merger. There’s mutual respect for where we’ve been and where we’ve gotten.” Rick elaborates: “We’ve never competed for freight — we have different operations — but we see a lot of opportunities to work together to grow each other’s business. What’s more, we have our operations in Central Oregon, while their strongest presence is along the I-5 corridor. But we both run these lanes. Now, we can utilize each other’s facilities for service, maintenance and fuel, helping us cut costs.” 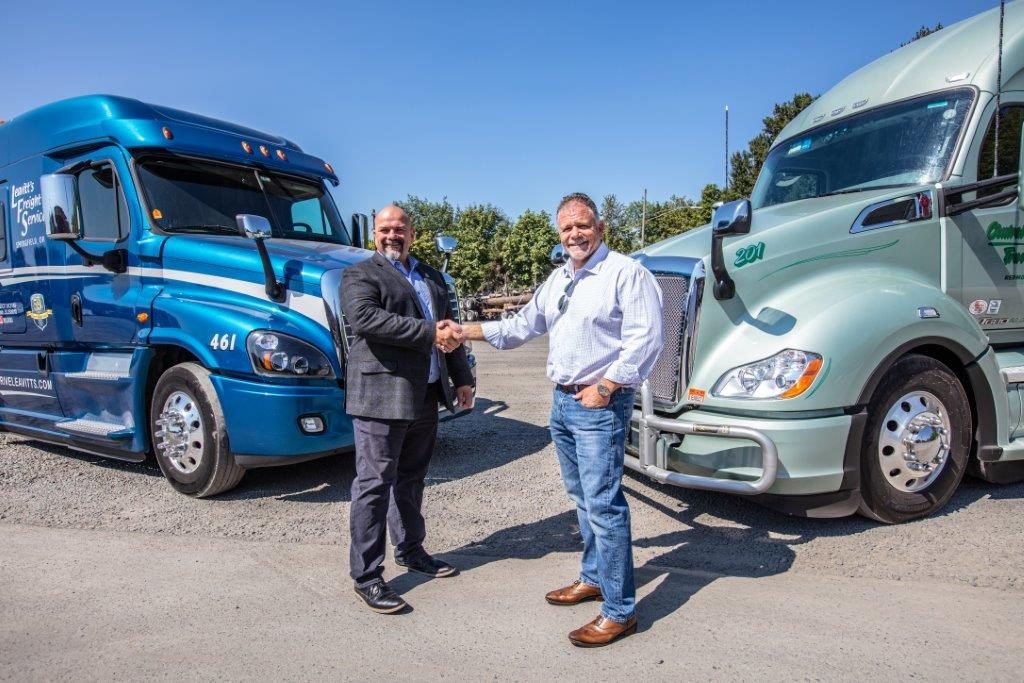 Headquartered just outside of Eugene, Oregon, Leavitt’s is the rare company that has not changed its core business over the years.

“We started by hauling poles and engineered wood products. We’ve continued that tradition, developing a very strong niche,” says Terry. “We’ve been working with the same utilities and the same lumber companies for decades. They know they can depend on us and our specialized equipment in any situation.”

While Duane and Terry only “officially” joined the company in the late 70s and early 80s, both spent their youth around the Leavitt’s yard.

“We swept floors, washed trucks and did odd jobs. We both loved shuttling the trucks around the yards after washing,” recalls Terry. “I really enjoyed driving, so, when I was 18, I got my chauffeur’s license and spent the summers driving one of our company’s self-loader trucks while I was at the University of Oregon. I loved it. I was a young kid doing a man’s job. In hindsight, I think that helped me earn the respect of our other drivers who saw me working hard and professionally.”

After earning a degree in business management, Terry went to work full-time — heading up return-load matching for Leavitt’s.

“I call it return load versus back-hauling, but it’s really the same thing,” Terry quips. “It was 1980 and deregulation had started. So, we were transitioning. Our loads were contract. We’d make a run down to California with a load of poles, for example, but had to return empty. Deregulation opened up everything, so my job was to find return loads. That meant creating a new revenue stream.”

A passing of the baton happened in 1996. Terry, then 29, and Duane, 27, put together a business plan to purchase the company from the Leavitts senior.

“We were awfully young, but we had a passion for the business, and we wanted to carry on the family name,” explains Terry. “Both Duane and I had worked in safety, dispatch, sales and other areas of operations, so we were pretty well-rounded. We made a promise to our dads to keep the company running for 10 years and make monthly payments for the business. And, with that, we had an agreement. Duane and I became the new owners of a 40-truck fleet.”

It was not easy going. The cousins faced trying times, especially with the dot-com bust in 2000.

“We had 10 lean years,” says Terry. “But we kept things going. We built the company. We strengthened our customer base. We stayed within our niche and broadened it.”

Helping solidify the Leavitt’s reputation, especially with the utility companies, has been its can-do attitude when dealing with natural disasters. When a hurricane, flood or wildfire strikes, utility poles need replacing — and fast.

“We’re not first responders, but we’re right in line after,” says Ron Riddle. “We responded to Katrina in New Orleans and were there for months. We also played a role in the Hurricane Sandy and Hurricane Harvey recoveries. During fire season in California, we’ll station trucks at triage centers with our self-loading units. This way we can pick up and drop off poles with a self-contained unit. In some cases, we’ll drive through closed roads where debris hampers access. In those cases, our picker can pull obstacles off the road so we can reach our destination.”

The Leavitt’s fleet is built to carry long loads, such as poles, that range between 25 to 140 feet in length. Some are small in diameter, others large, and each pole is designed to serve a specific purpose.

“There are different classes of poles for different applications,” explains Ron. “There are distribution poles, which carry lines from pole to pole. There are transmission poles that can rise up to 140 feet. Each utility has to look at wind, ice and wire loads to gauge what size pole they need.”

Leavitt’s uses 45- to 48-foot flatbed trailers as well as a bunk system for its tractors. Their long-wheelbase Kenworth and Freightliners can also handle “float loads” — poles are secured on the tractor bunk and tethered to a “floating” trailer being pulled up to 25 feet behind. The lengthiest loads require steerable trailers that are equipped with a cockpit for the trail driver.

While moving poles is challenging work, Leavitt’s also takes on less specialized and more conventional jobs. That includes hauling trusses and engineered wood products for construction projects, plus steel decking. In fact, the company moved much of the steel decking for the Amazon buildings in the Seattle area.

As a former driver, Ron remains very hands-on, even getting behind the wheel in a pinch.

“My whole career has been with this company, and I became a partner when I turned 30,” he says. “After hanging up my keys, I worked in freight brokerage, then became VP of marketing and sales before being named CEO in 2017. But I still love to drive on occasion. It always surprises customers when I pull up in a truck with a load. But it shows two things: one, that we take customer service very seriously; and two, we have our drivers’ backs. I would never ask our drivers to do something that I wouldn’t do myself. If we spot an issue with a customer, I’ll often take the load and see for myself if there’s a problem. If there is, I can address it with our customer directly. In one case, we shortened the loading process by half. Communication was the key to making that happen.”

When it comes to working with COTC, Ron says he looks forward being mentored by Rick and other Daseke sister company executives.

“I’ve considered what Rick and his team have built to be world-class,” says Ron. “If there were a university where you could learn trucking, COTC would be the professor. They know how to grow a trucking company, do it right and do it ethically. It’s not a fluke that they were named the Best Fleet to Drive For in this year’s competition. It’s a status we hope to one day achieve as well, and we’re situated to do that so much better now that we’re working with COTC.”

If they do become a Best Fleet to Drive For, it will match some other major accomplishments Leavitt’s Freight Service already has under its belt. They were named Fleet Safety Grand Champion by the Oregon Trucking Association’s (OTA) in 2016, and Gene Hullette, who serves as the company’s safety manager, was named the Safety Professional of the Year. This year, Leavitt’s captured first place in the OTA’s Fleet Safety Awards in the large fleet category.

As a new chapter begins for Leavitt’s Freight Service, Terry reflects on the excitement that the entire company feels at the prospect of joining COTC and the Daseke organization.

“We’ve never been for sale, but we’ve had a lot of phone calls from equity companies,” he says. “And there was never any interest on our end. We had a legacy and a name we hold with pride. More importantly, we have a lot of loyalty to our people. Many, like Ron, have been with us their entire careers. What Daseke and COTC have accomplished caught our attention, however, and we were open to listening. We’re glad we did. They won’t change us — they will only make us better. That way, everyone wins.”