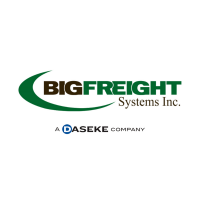 If you had to name a trucking company that rules the roads of Canada, two would likely come to mind: Big Freight — which celebrated its 70th anniversary in June — and Kelsey Trail Trucking, a 38-year veteran of the industry and one of the original B-train haulers.

Over the years, mutual admiration has grown between the two companies.

“We’re a lot alike, yet different,” says Gary Coleman, president of Big Freight. “We’re both second-generation trucking companies with a passion for what we do. We live and breathe trucking. Yet, when we pass each other’s trucks, it’s not as competitors. We haul single loads primarily to and from the United States or across Canada. Kelsey Trail hauls coast-to-coast with its B-trains, plus they have a regional operation based near Toronto.” 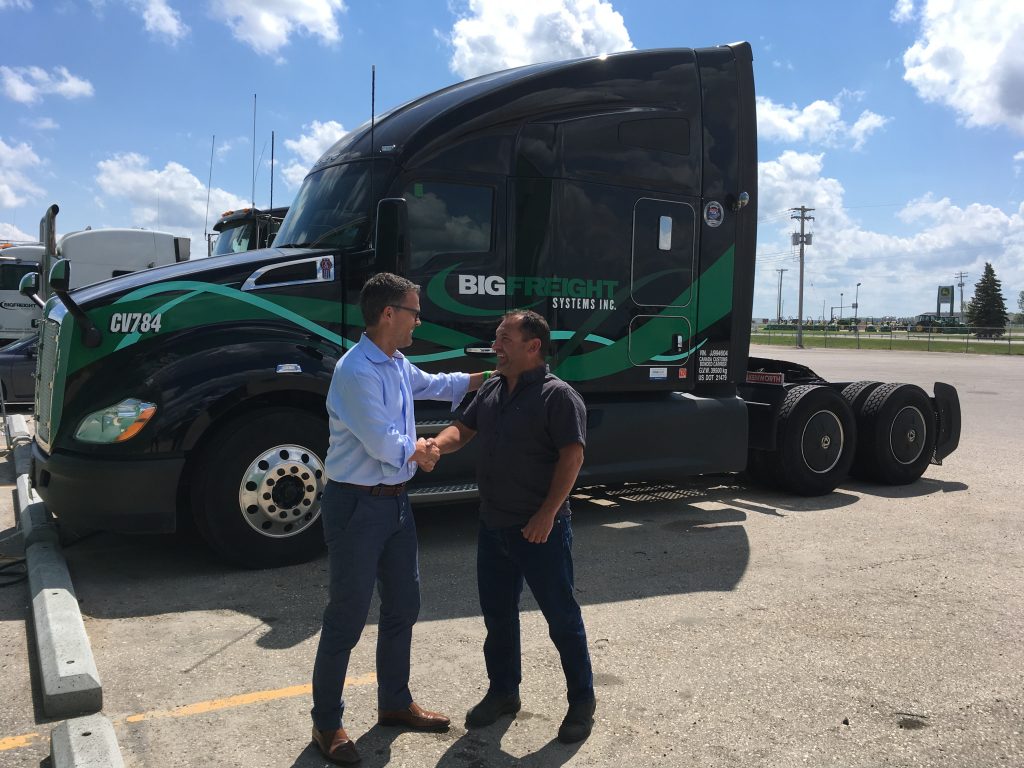 Now, these iconic Canadian fleets will be working together. Under the terms of their recent merger, Kelsey Trail Trucking will operate as a division of Big Freight. It’s a strategic tandem sure to spur growth and opportunity for both companies.

“It’s a great match,” says Jim Clunie, president of Kelsey Trail Trucking. “I’ve long admired Big Freight. They have a long family history in trucking like we do. Their trucks have always stood out and have a great reputation. Joining Big Freight makes me feel like I’m a 25-year-old again. The future is ahead of us, and there’s both new energy and a lot of possibilities. I can’t wait to see how everything unfolds.”

The “second chapter” for Kelsey Trail Trucking follows chapter one, which began in 1981 when Jim’s dad — Gord — and mom — Eileen — started the trucking firm with three brand-new tractors and trailers in the small town of Tisdale, Saskatchewan. In tribute to their base of operations, they named their new company after a famous trail in Northeastern Saskatchewan.

“Dad had always worked on the family farm, and ran the family dump truck and other equipment, while my mom worked for a credit union and insurance company,” Jim recalls. “Back in those days, farming was generational, and kids were expected to follow their parents. But, when my grandparents died, Dad decided to sell the farm and move into trucking. He liked to work on equipment and was familiar with B-trains. My mom knew finance. So, the two worked well together. Dad ran the trucking company, managing the equipment and loads from Saskatoon to Vancouver, while Mom handled the books and cash flow.” 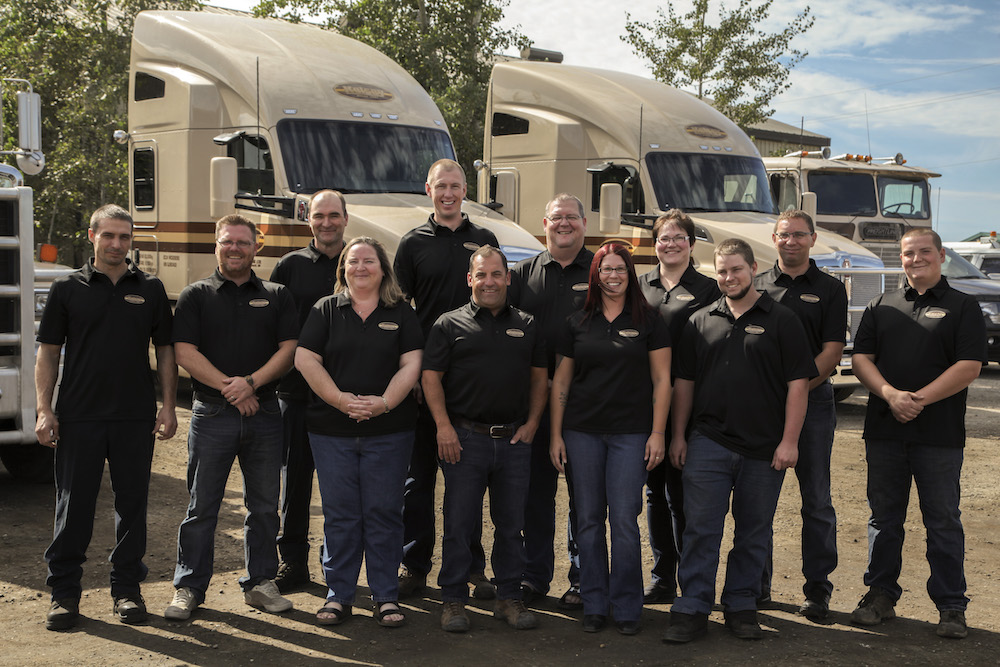 When it came to trucks, Gord was more than a jack-of-all-trades. He was an innovator, running convertible trailers that featured fold-down panels. This allowed his small company to run grain to the West Coast with the sides up, then run a flat deck loaded with steel on the way back.

“My dad was one of the only ones doing that. It was pretty creative at the time, and it’s something that’s just not done anymore,” says Jim.

However, as with any business, there will be hardships. In the mid-1980s, Gord’s house burned to the ground.

“But we survived that, along with other struggles of having a new business,” recalls Jim. “Then in 1992, we moved to Saskatoon. Dad needed a bigger customer pool, and that was the midway point between East and West. In order to grow, he had to go into Ontario: the hub of Canada.“

As the fleet grew to 30 trucks, Kelsey Trail Trucking dedicated its B-trains to moving industrial products from the East and backhauling cedar from the West.

“Since we provided a good service, and had the capability to do LTL with multiple drops, we had a competitive advantage over a lot of other trucking companies,” says Jim. “We could haul up to 94,000 pounds of payload. It’s a niche we’ve never let go of.” 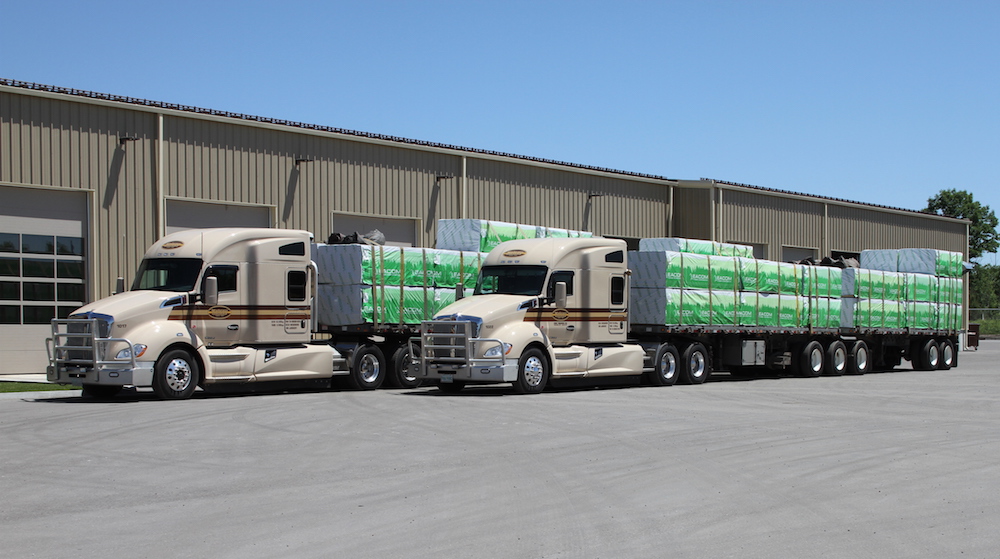 Jim joined the company full-time in 1997, giving up his athletic career as a world-class water ski jumper. He won two bronze medals in world championship events and was ranked among the top 5 in the world.

“I’d jump in the summer, then work for my dad in the winter. But I hung up the skis for good in 1997. Water skiing was a great experience. I got to travel to some great places.”

So, at the age of 27, Jim joined his parents. And he wore many hats. Jim drove trucks, worked dispatch and even spent some time in the shop.

“We still had a small operation at the time, so this gave me the experience I needed to fully understand how the trucking business worked,” he says. “Business was never slow. When you’re good, you can always find loads. Mom had two Rolodex rotary card files, and if we ever needed a little more business, she would start at ‘A’ and work her way through the alphabet. She never had to get to ‘Z.’”

The biggest catalyst for growth came in 2001. The company decided to open a facility near Toronto to better consolidate LTL shipments as well as its 18 tractors and B-train open-deck trailers. But then 9-11 happened.

“Those six months that followed were not pretty,” recalls Jim. “We decided to hang in there and open the facility as planned. I think if we had backed out, our company wouldn’t have survived. It was a gutsy move in the face of the unknown, but by 2002 everything was better. I like to say we were born in the Prairies and became adults in Ontario.”

Jim ultimately purchased the company from his parents in 2005. Today, he’s flanked by business partners Tyler Nontell and Mike Kistner. Tyler is operations manager, and Kelsey Trail is all he’s ever known, from sweeping floors when he was just 15 to driving trucks at 18. After college, Tyler joined the company full-time. Mike has been with the company since 1999. He currently serves as the company’s sales and dispatch manager.

“Dad passed away in 2010, but Mom is still very active in the business, working in accounting,” says Jim. “Her contribution can’t be overstated. She still works every day, and her conviction and hard work are the backbones of this company. We wouldn’t be where we are without her.”

Kelsey Trail Trucking operates a mix of late-model Kenworths and Peterbilts. They have nine 53-foot trailers, but their mainstay is the 5-axle B-train: 32-foot lead trailers and 28-foot pups. Kelsey Trail is the largest B-train operator in Canada. They’re also the nation’s the biggest lumber carrier. The company’s long-haul fleet goes all over Canada, backhauling 90 percent of the cedar that comes out of British Columbia. Kelsey Trail has also developed a regional fleet that makes deliveries from the Toronto area up to the northern part of the province and into Quebec. 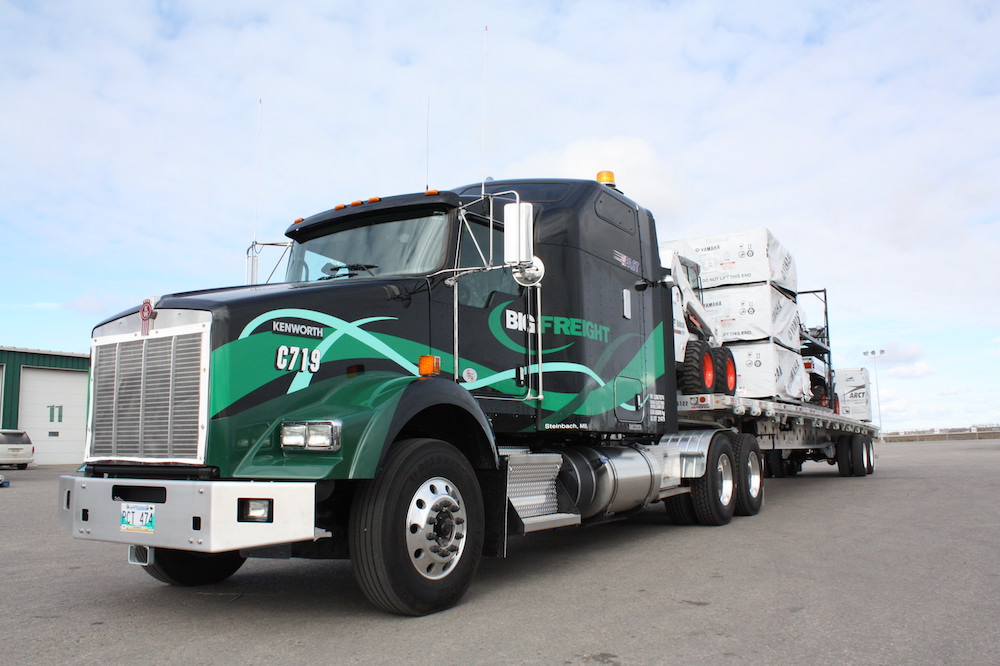 As for what’s next between Big Freight and Kelsey Trail?

“This merger will allow both companies to rise to the next level and beyond in terms of driver satisfaction,” Jim says. “I’ve always believed that with the weights we haul and the distances we have to travel across Canada, we have the toughest driving job out there. Our drivers are a very hardcore people who can handle both the physical challenge of the work and the long, skill-testing hours at the wheel. Merging with Big Freight will give us the opportunity to better support our team by giving us access to their first-class facility in Steinbach and property in Winnipeg.”

“And, for Big Freight, we will have access to Kelsey Trail’s new 42,000 square-foot facility north of Toronto,” adds Gary. “Jim and I have spoken for hours on end about the possibilities of the knowledge and experience we can share and add to one another’s operations. This will only lead to the betterment of both our combined staff and customer base. The more efficiently we can operate day-in and day-out, the more competitive we will be long-term. We will raise the bar and offer an unparalleled level of service and capacity. This next chapter will be remarkable. It’s going to be good for the Big Freight team, good for the Kelsey Trail team — and good for our customers.”