Finding new ways to do things better. That is the essence of innovation, and the qualities HDT looks for in its annual Truck Fleet Innovators every year – fleet executives who are trying to find new solutions, both simple and cutting-edge, to challenges faced by trucking fleets.

The 2019 HDT Truck Fleet Innovators were on hand at the Heavy Duty Trucking Exchange Fleet Conference in Scottsdale, Arizona, on May 9, to accept their awards and take part in a spirited panel discussion moderated by Equipment Editor Jim Park and Gerry Mead, executive director of innovations for Phillips Industries, which sponsored the awards.

The 2019 Fleet innovators honored at HDT were:

(Two were unable to attend the event due to urgent last-minute business matters.)

The first question was to Bill Brentar, with Park wanting know how UPS – which is known as a leader in emerging vehicle technology – selects which new systems or components it wants to evaluate in fleet operations.

“We look at all the available technologies simply because we’re large enough to do so,” Brentar replied. “We call it our Rolling Laboratory. And we’re looking for specific benefits from new technology, namely efficiency, reduced emissions, ROI and reliability.”

Brentar said, however, that many times, the technology doesn’t deliver on all fronts.

“You have to evaluate things carefully,” he said. “Because what works in Atlanta or Phoenix might not work in New York City.”

Park pivoted to Wirkkala and Smokey Point Distribution, which began offering its drivers a choice between conventional by-the-mile compensation and a new salary program, asking how drivers were determining which payment option was best for them. 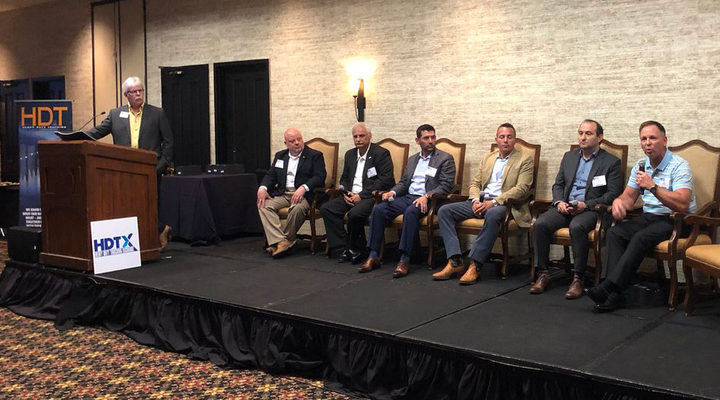 Wirkkala said balancing the two programs was critical to their success so far. Most drivers, once they’ve made themselves available for dispatch, have very little control over getting the minimum number of miles they need each week to provide for their families consistently, he noted.

“Our salary program really addresses those shortcomings,” he said.

According to Wirkkala, Smokey Point drivers who opt for the salary program are guaranteed payment for 9,900 miles a week – whether they actually hit that mileage number or not. Every mile a salary driver logs over the magic 9,900 number is banked by the fleet, and paid out as a bonus after 12 months if the driver is still with the company.

“We just had our first driver meet his 12-month goal, and we paid him an $18,000 bonus based on his banked mileage,” Wirkkala said. “And we did that because knowing that money is in the system – and that it goes away if a driver quits – helps them work through any issues that may arise and helps us with retention. Moreover, because their income is stable, those drivers are able to consistently provide the income their family needs to pay bills and provide for themselves. And that takes pressure off of wives, makes them happier, and eases stress on that front at home.”

B&B Transportation has earned a reputation as a leader in new technology, and Park was curious if the fleet’s niche as a mail carrier with dependable, consistent routes made it easier for it to evaluate and validate new vehicle systems, and which technology Porter felt had delivered the most benefits for his fleet and drivers.

“You really can’t pin it down to one technology, because different technologies tend to complement and build on one another,” Porter answered. “But to your first question – Yes. Because we run set trucks on set numbers on set routes, we are very interested in platooning technology. If you are in Detroit as our trucks are rolling out, it’s not unusual to see seven or eight B&B trucks roll by one after the other. So, although we haven’t done it yet, we think we are a prime candidate to make platooning a reality in our operations.”

To date, B&B’s most successful programs have focused on aerodynamics, idle reduction, and driver coaching tools.

“We can’t do trailer tails because of our rear door configuration,” he noted. “But we have gotten excellent results from 42-inch side skirts. We’re also tracking our speed and miles traveled, as well as driver performance in those metrics. But our biggest struggle at the moment is taking all that data and analysis and getting it in a way that is easy for us to review it. We need better tools to streamline the data collection and produce it in a format we can use effectively.”

Navajo Express has built a reputation for trucks spec’d with both drivers and productivity in mind. Park asked Digby what challenges his executives faced in not only identifying new specs but also in getting them onto the trucks in a timely fashion. Digby noted that just because a spec finds its way onto a Navajo truck doesn’t mean it’s carved in stone forever.

“Just because you did something five years ago doesn’t mean it still works today,” he quipped. “So you have to have a process of continually evaluating your vehicles and their specs. There’s a lot of cool stuff out there today. But cool stuff doesn’t necessarily translate into ROI [return on investment]. So you have to be cautious. You can buy a fifth wheel that can save you a lot of weight, for example. But you have to understand if that fifth wheel is also going to deliver the safety and longevity you need from that component as well.”