You are here: Home › News › Daseke › For Don Daseke, Horatio Alger Award Is An Opportunity To Encourage The Next Generation Of American Leaders 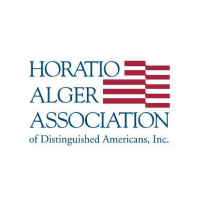 Don Daseke can claim many accomplishments. Even more impressively, over the course of a business career which has seen him achieve success by overcoming setbacks and disappointments, Don Daseke has also learned a few lessons about powering through adversity.

As a 2018 inductee into the Horatio Alger Association, Don recently met the scholars the organization supports and mentors in their bid to overcome life’s hardships, complete their college education and become successful. 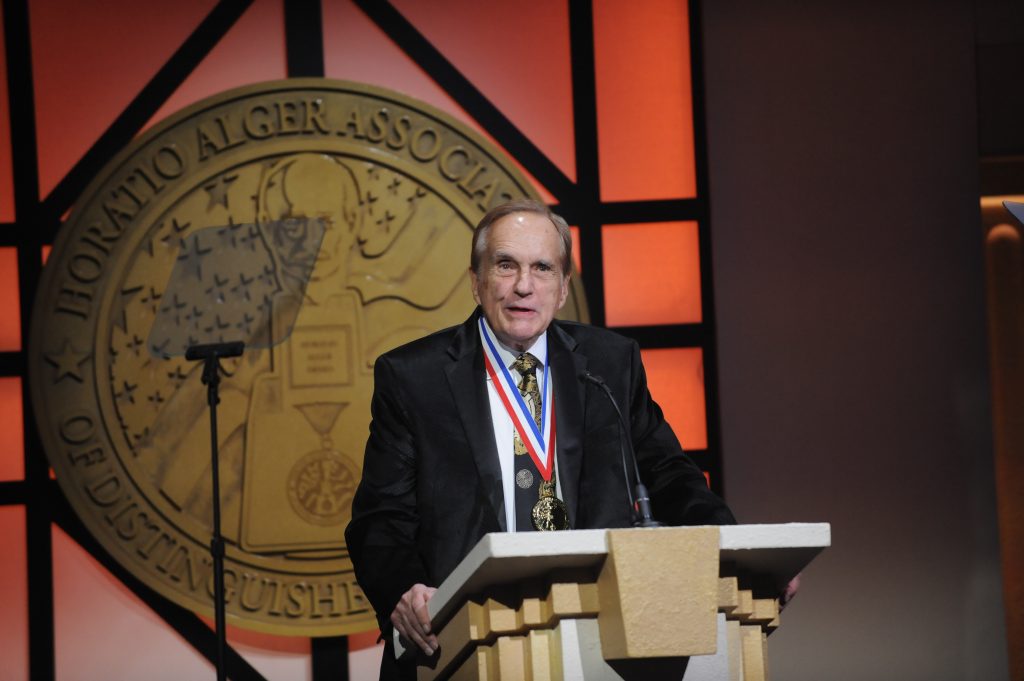 Hearing their stories, Don says, has given him a new level of appreciation for the power of personal perseverance. It’s also reinforced the value of his own business philosophy: “Invest in People.”

The stories Don heard from these students were often harrowing. One had lived most of her life in foster homes — 29 in all. Another had seen her father kill her mother. A third’s brother had largely disowned her for not selling drugs.

However, as Don learned, what that each scholar does possess is a fierce inner determination to overcome those obstacles and to not allow their past to define their future.

“I saw that determination in their eyes,” Don says. “They have the grit to go forward and make something of themselves. I have great admiration for people with that desire.”

But determination and grit still need assistance and encouragement. That’s where the Horatio Alger Association’s program comes in.

The Horatio Alger Association of Distinguished Americans (named for the author of a series of novels popular in the late 1800s featuring rags-to-riches stories) is a non-profit organization which each year recognizes those who have demonstrated in their own lives and careers an ability to achieve success despite modest beginnings.

According to the Association, each honoree’s personal history reflects the values of “personal initiative and perseverance, leadership and commitment to excellence, belief in the free-enterprise system and the importance of higher education, community service, and the vision and determination to achieve a better future.”

In addition, the organization provides millions of dollars annually in scholarships to students for whom college would be impossible without financial support. In 2018 alone, the Horatio Alger Association awarded scholarships to 104 high school students across the nation.

As important as this financial support is, the Horatio Alger program also provides intangible awards that can be just as impactful. The scholars Don met thanks to the Association “want people to believe in them,” he says.

“What a basic concept that is — that somebody respects me and believes that I can have a future, notwithstanding that I’ve had a shaky past through no fault of mine. It’s very fundamental to have people believe in you.”

Don can relate. His rise from modest beginnings in Crawfordsville, Indiana, was aided by people who believed in him. Chief among them were his mother and father, who taught him the value of hard work and encouraged his entrepreneurial ventures. Those ventures included a newspaper delivery route, a pedal cart from which Don sold ice cream (and which he eventually expanded to a fleet of two carts) as well as a small restaurant his parents started.

Don’s big break came when he won a scholarship to DePauw University in Greencastle, Indiana. He later received a scholarship from DePauw which allowed him to attend graduate school at the University of Chicago.

“DePauw invested in me,” he says. “That’s the foundation of my philosophy, to invest in people. DePauw believed in me.”

The lessons Don learned and the personal connections he forged with professors, university staff and fellow students have, in his words, “stayed with me all my life. If you invest in people and surround yourself with really good people, operate ethically and intelligently and work hard, you can accomplish some pretty good things.”

For Don Daseke, those good things have included a successful stint as a computer salesman for IBM (even though the computer giant initially said it hired engineers, not accountants) and the founding of Walden Residential Properties, a real estate investment trust that developed apartments across North Central Texas.

Then came a bout of adversity. A perfect storm of economic gales sank the real estate market.

“My company went from being successful and very profitable, with a fancy net worth, to being bankrupt,” Don recalls. “I was absolutely broke and was unexpectedly divorced because my wife saw my financial ship was sinking. My parents had to move to a nursing home because of their health. I was financially insolvent and emotionally beat-down.”

These misfortunes led to some soul-searching. In the process, Don discovered that he wanted to do more than survive. He wanted to thrive once more. He accomplished that by rebuilding Walden, taking it public, selling it and going on to found the Daseke family of flatbed haulers.

Making the decision to be a survivor defines the Alger scholars he’s met, Don says.

Don plans to invest in those scholars’ success by providing advice and encouragement.

“I’ve had emails from the students I met, and I responded to them right away,” he says. “One said, ‘My face lit up when I got your message.’ It’s important to show that someone cares about them. I can take the time to show these scholars that I care about them.” 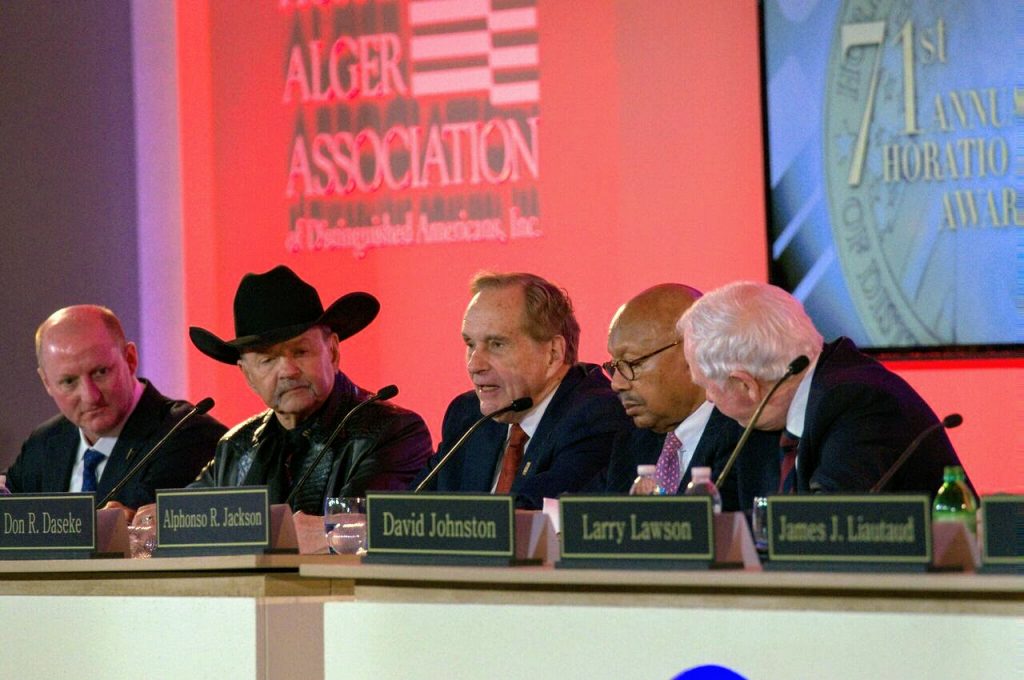 Don’s involvement in the Horatio Alger program also entails making financial contributions — again, in keeping with his personal philosophy and real-world practice of investing in people. For example, Don and his wife Barbara have pledged to donate more than $20 million in scholarships to his alma mater, DePauw. Moreover, Don plans for the majority of his estate to go to the university, thus helping create for others the same opportunities that were of such benefit to him.

Don also figures he’s getting something in return from joining and being active in the Horatio Alger Association.

“You learn from the other Alger members and from the students. You don’t stop learning. When you stop learning they put you six feet under,” he notes. “I plan to keep learning.”

That’s one of the life lessons Don’s learned and hopes to instill in the Alger scholars. Another is never to give up. In fact, in his acceptance speech, he emphasized that point.

“Never, never, never give up,” he told those gathered.

Of course, there’s more to it than that.

“‘Never give up’ is easy to say and tough to do when things are pretty grim,” Don acknowledges, “but it can be done. Some people asked when I was broke if I was going to give up. I said, ‘No I’m not. I’m going to hang in there and work out everything.’ And I did.”

Don is betting that more than a few Alger students will compile success stories to rival his own.

“The scholars I’ve met give me hope,” he says. “It’s exciting to know that these smart, caring, committed young people comprise the next generation of American leaders. I can’t wait to see how they will change our world for the better.”