You are here: Home › News › Daseke › Daseke’s New Chief Operating Officer Is On the Move

From growing up in a military family to his service as a decorated officer in the Army, from working for the world’s biggest retailer to a series of executive roles at transportation and logistics companies, Chris Easter has a lifetime of experience in getting people and things from one place to another. He has a passion for helping people figure out how to remove obstacles to accomplish their goals.

Now as the chief operating officer of Daseke, Chris’ role will be to use his experience and expertise to continue to work with the team to leverage Daseke’s scale. Chris, a big fan of playing strategy games in his downtime, is excited about the challenges and opportunities to create value within the Daseke organization. 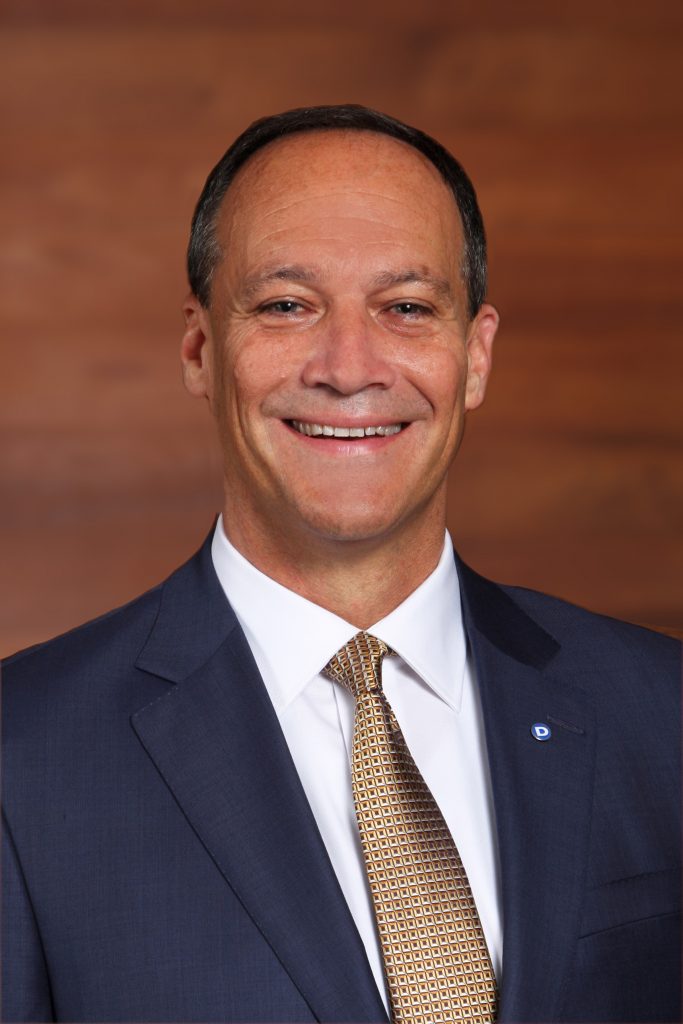 “We’re thrilled with Chris’ energy and unique experience,” said Don Daseke, chairman and chief executive officer. “To build and run North America’s largest flatbed and specialized freight company requires blending expertise and vision. Chris appreciates our big-picture vision. He understands how and where we can leverage our vast expertise, so we will continue to grow.”

Chris has known Daseke – the man and the company – for several years.

“I was well aware of Daseke’s vision and strategy,” he says. When he and the company began talking about adding the role of COO to a growing company, “I knew it was the right fit for me personally and professionally.”

“Complexity and unknowns energize me,” he adds. “It gets my juices flowing, and it allows our team to create new and innovative solutions.”

The tools, attitudes, and vigor which Easter brings to Daseke were honed by life in the military, which started when he was born in Augusta, Ga., the son of an Army bandmaster.

“We lived all over the place,” he says; deployments included a stint in Germany. “The first time I lived somewhere as long as four years was when I went to college.”

College came a bit later for Chris than for many students. At the start of his senior year of high school, he signed up for a delayed Army enlistment.

Which he did. Since he’d grown up in and around the military, it was familiar terrain for him, and he enjoyed his time. He followed his father’s footsteps not only by joining the Army, but by playing saxophone in the army band.

It was his father who suggested entering the U.S. Military Academy at West Point, but doing so required a 10-month detour into an Army prep school to get him ready for college work. The prep school, Chris recalls, “was a good transition for me. I had to retool myself.” 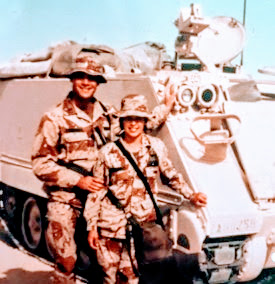 West Point was also a great experience for Chris, first because of the education (“It’s all it’s said to be” in terms of quality and rigor) and second because it’s where he met his wife, Carla, also a West Pointer, who was one class behind his. Since cadets can’t be married, Chris and Carla waited until four days after her graduation to have the wedding.

As much as he enjoyed West Point, “I couldn’t wait to get out and start doing things,” and a prime place to do things, he decided, was as a transportation officer. He planned to make a career of the Army, but “I knew transportation might have applications in the outside world, which it has for the last 25 years.”

The big opportunity to prove himself came in the months leading up to Operation Desert Storm in early 1991, when a coalition of forces led by the U.S. freed Kuwait from Iraqi control. Chris’ specialty was moving heavy armor like tanks to the combat theater.

“Making all that work was fascinating to me,” says Chris, a military-history student who understands the crucial role logistics play in the success of a campaign. “In the military, they say ‘amateurs talk tactics, professionals talk logistics.’ There’s some truth to that. It was unbelievably fulfilling to help support that mission with a vast logistics effort.”

The months of preparation paid off with a quick military campaign, followed by months of work getting equipment back to the U.S. For his efforts, he was honored with a Bronze Star.

Carla deployed to Operation Desert Storm as a medical service officer and platoon leader. “She went all the way to Kuwait City during the ground war,” he says.

Following the war, the U.S. began personnel reductions in its armed forces. The Easters figured it was time to move on to the next chapter of their lives, including starting a family.

They both joined a company, which, in building the world’s largest retailer, has learned a few things about logistics: Walmart. 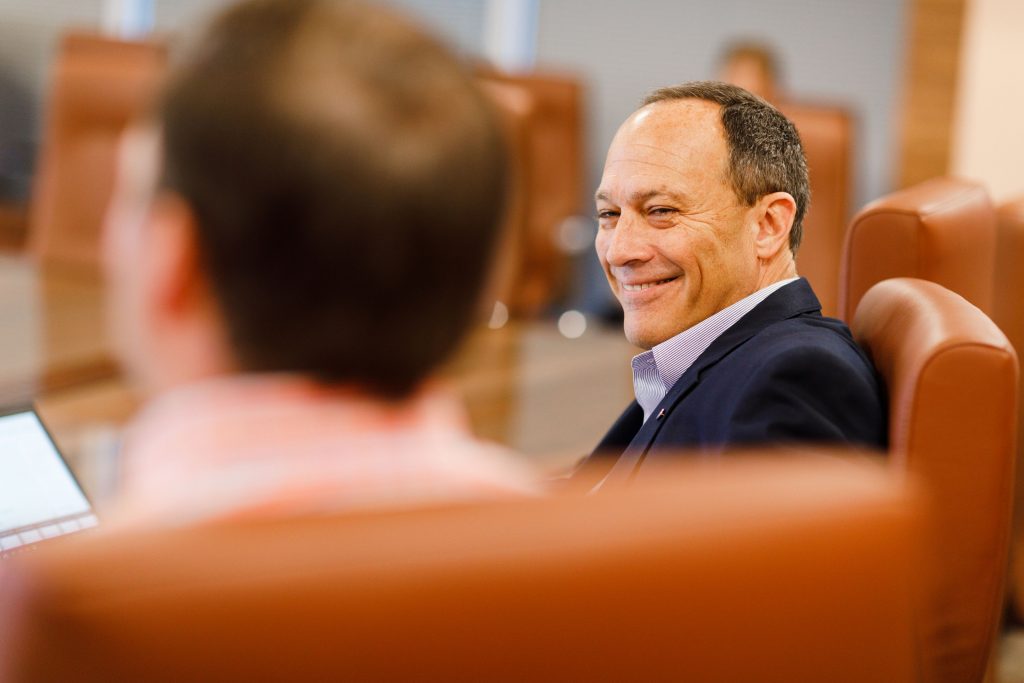 It was an exciting time to be there, he recalls.

“We could clearly see where we were headed, and we wanted to be a part of the growth.”

He learned a lot too.

“In the army, I got my bachelor’s in transportation; at Walmart, I got my Ph.D.”

Chris is no stranger to high-growth companies. In his time at Walmart, the company grew from just over $40 billion in annual revenue to more than $300 billion, and at that point, Chris decided it was time to shift gears again.

“It was maturing as an organization,” he says. “The breadth wasn’t there for me. I wanted to expand my knowledge base, work for smaller organizations, learn sales and do many other things beyond operations; I wanted to grow.”

Easter served as vice president for Schneider National, COO for RoadLink Workforce Solutions, CEO of Keen Transportation and, most recently before joining Daseke, senior vice president of the Americas for Wallenius Wilhelmsen Ocean & Solutions, which purchased Keen. In several of those cases, the company was working through the challenges of transitioning from family owned to corporate ownership.

“I was able to lead the transition through respecting everyone’s unique perspectives,” he says.

On the home front, Chris and Carla have two sons, one recently graduated from the University of Georgia and now working in Atlanta, the other a student at Mercer University. Carla Easter, who was an All American soccer player at West Point, is now a certified professional tennis instructor, even though she didn’t play the sport until she was 30.

For relaxation, Chris Easter reads and plays at military history, with a collection of more than a hundred military-history-themed strategy games. As a teenager, he says,

In reflecting on his career for advice to pass on to others just beginning theirs, Easter acknowledges that “there really wasn’t a lot of design on the front end. I steered myself more to what I enjoyed doing and was good at it.”

As it turned out, both his interests and talents merged in transportation and logistics, and that might be the underlying lesson, he adds:

“Balance your passion with your skills and join teams that have both a vision and great people.”