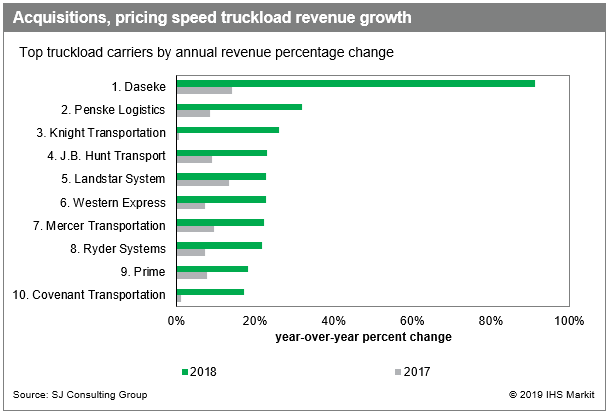 Trucking companies that made double-digit revenue gains last year will find the feat hard to repeat in 2019, as the US economy is widely expected to slow. But the fastest-growing US motor carriers are still betting a combination of acquisitions, territorial expansion, and strong freight demand from their customers will help them raise their toplines even higher.

“If demand is strong, we’re going to have a good market, and a good year,” Don Daseke, founder, chair, and CEO of specialized truckload carrier Daseke Inc., said in an interview.

Daseke’s trucking revenue shot up 91.3 percent to $1.35 billion, according to the transportation research firm. The final figure may be even higher, as the company claimed $1.6 billion in total revenue for 2018 in a preliminary financial statement released Feb. 7. That growth was powered by the acquisition of five specialized and heavy-haul flatbed trucking companies in 2018.

The company went public through a $626 million merger agreement with Hennessy Capital in early 2017. That merger fueled two years of acquisitions that took Daseke’s revenue from $651.8 million to well over $1 billion. This year, the company plans a break from acquisitions and will focus on its 17-company network and launching a specialized flatbed brokerage.

After Daseke, the next fastest-growing truckload carriers also increased revenue by acquisition. Penske Logistics, which acquired Epes Transport System last June, increased revenue 31.9 percent to $919 million, according to SJ Consulting Group. Knight Transportation raised revenue 26.2 percent, pushing it up to $1.14 billion, after acquiring Abilene Motor Express.Many of these acquisitions were about securing truck drivers, not customers or revenue, said Satish Jindel, founder and president of SJ Consulting Group, which was a strategic advisor in Knight’s purchase of Abilene Motor Express.

“Adding drivers was difficult,” he said. “To grow you couldn’t just add drivers, you had to acquire them, and that meant acquiring companies.” 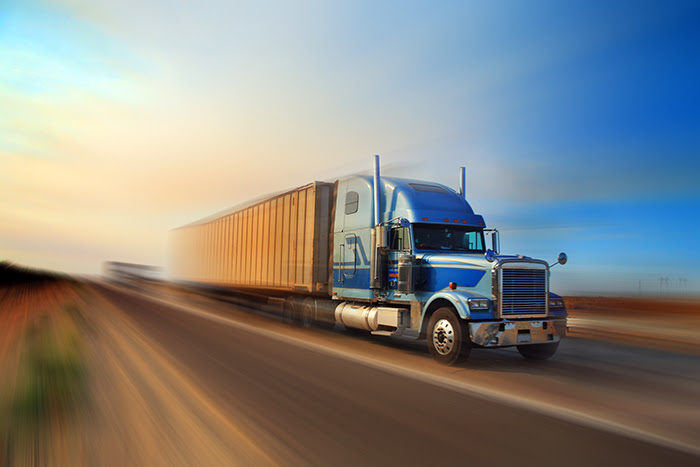 The 10 fastest-growing truckload and less-than-truckload carriers saw revenue increase by an average of 29.8 percent and 15.2 percent, respectively, in 2018. Photo credit: Shutterstock.com.

“We’re starting off the year in a good spot, and we feel optimistic,” Adam Satterfield, chief financial officer at ODFL, told Wall Street analysts in a Feb. 7 earnings call. “A lot of that optimism is based on macroeconomic trends that we see as well as the customer demand trends that we continue to get reports from our sales team on.”

Multiregional LTL carrier Saia has opened 10 terminals in the Northeast in the past two years and plans to open another four to six terminals in the region in 2019. “We’re excited about continuing our push into the Northeast,” CEO Rick O’Dell said in a Feb. 4 earnings call. Saia’s Northeast push likely contributed to the bankruptcy of New England Motor Freight this month.

Several of those privately-owned companies expanded terminal networks and added services in 2018 and recent years. Dayton Freight, which specializes in one- and two-day LTL service in the Midwest, recently expanded a service center in Oshkosh, Wisconsin, and recently opened a new terminal in Madison, Wisconsin. The LTL company launched a truckload service last year.

The fastest-growing LTL carriers were fueled by “a combination of pricing discipline and better mix of freight in terms of weight and cube, and they’re getting paid for the cube,” said Jindel. “They also have good visibility into what the cost is to handle each account. LTL carriers did a better job of using dimensioners to get paid for the characteristics of the freight.”