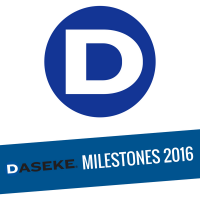 Watch our Daseke 2016 Milestones video to see our favorites moments from the past year.

Central Oregon Truck Company named for the third consecutive year as one of North America’s 20 Best Fleets to Drive For®, and Smokey Point Distributing crowned as TCA’s safest fleet in the 15-24.99 million-mile division.

Boyd Bros. Transportation stepped up to support Truckers Against Trafficking by teaching its drivers how to spot illegal activity and report it to authorities at a workshop in a Boyd Bros. terminal.

An Unexpected Truck Stop Delivery for a COTC Driver: a Baby Girl

Dan Leon-Guerrero, a driver for Central Oregon Truck Company, used his EMS training to help deliver a baby girl when a mother-to-be went into labor at a Flying J truck stop.

Brian Matthews, a driver for E.W. Wylie, spends his time off creating beautiful woodworking projects in the cab of his truck. Brian presented a blue and white Daseke-themed wooden ship to Don Daseke with his mantra of “Investing in People”.

Daseke rises to the top and is awarded first place in Flatbed, Specialized Carrier in the Commercial Carrier Journal Top 250 Rankings for 2016. Daseke also climbed the list in the overall category to #42.

Dave Baker from Boyd Bros. Transportation was invited to join the Dave Nemo show for Tech Talk with TMC to discuss new trends in safety and technology in the trucking industry.

Rendy Taylor, CEO of WTI Transport, shares about his weight loss journey and how it has changed his life for the better. He has inspired many through his commitment to healthy living and hopes to continue his journey into 2017.

Bulldog Hiway Express was awarded first-place honors in the “general commodity/local haul” (up to 25 million miles) and “heavy haul – unlimited” categories. They also came in second in the “flatbed/line-haul” segment (up to 10 million miles).

Daseke had drivers from several companies volunteering to deliver wreaths across the country for Wreaths Across America in December to honor our country’s veterans.

Don Daseke sends a message about the upcoming merger with Hennessy Capital to become a public company. His dream of Daseke going public and each employee being able to share in that growth will now be possible!