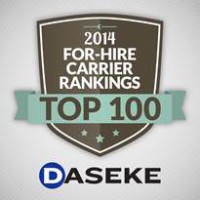 Daseke Inc., ranked No. 59, made its first appearance on the list.

Looking at revenue numbers and truck capacity, Daseke Inc. would rank No. 2 in North America when it comes to open deck carriers.

The article said that Daseke Inc. was one of two companies making a “splash” in the industry – with five flatbed carriers joining the Daseke family since 2008. Revenue was listed at $447 million and the combined Daseke companies employed 1990 people.

In the article, written by Dan Bearth, Don Daseke talked about what drew him to the trucking industry — Smokey Point Distributing was the first company to join the Daseke family in 2008.

Bearth quoted Don as saying: “I really liked the people (after meeting the SPD owners). My philosophy is to invest in people. Anyone can have a few trucks, but people make the difference.”

The article goes on to discuss why Don decided to expand beyond SPD – Don said it was because he realized no company was offering high-service open-deck hauling on a national basis. Daseke set out to change that and orchestrated several more transactions – bringing E.W. Wylie, J. Grady Randolph, Central Oregon Truck Company, and The Boyd Companies into the family.

“The addition of Boyd Bros catapulted Daseke Inc. to No. 59 on the Transport Topics Top 100 list of U.S. and Canadian for hire carriers,” wrote Bearth. The article goes on to talk about how the autonomously run Daseke companies collaborate and share best practices. Don said it makes each carrier more efficient and a more appealing place to work.

Don was quoted as saying he wasn’t through with expanding the Daseke family. “I’m looking for outstanding companies with strong management and safety culture. We do not take over management. We’re giving them an opportunity to be part of something bigger.”