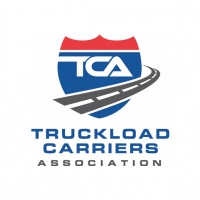 It never gets old. Recognition of our people that is. And for Don Daseke, president and CEO of Daseke Inc., the latest recognition from the Truckload Carriers Association (TCA) and CarriersEdge may be the most meaningful.

“We’ve built a world-class organization of flatbed, specialized carriers and having Central Oregon Truck Company (COTC) named for the third consecutive year as one of North America’s 20 Best Fleets to Drive For® was terrific,” said Daseke. “But even more so was the fact that the majority of our companies – six of them – placed in the top 63 of all carriers. That truly is something and validation that people truly do make the difference at Daseke. We are proud of the family atmosphere at our companies, which has led several of our companies to have driver turnover rates of less than 25 percent.” 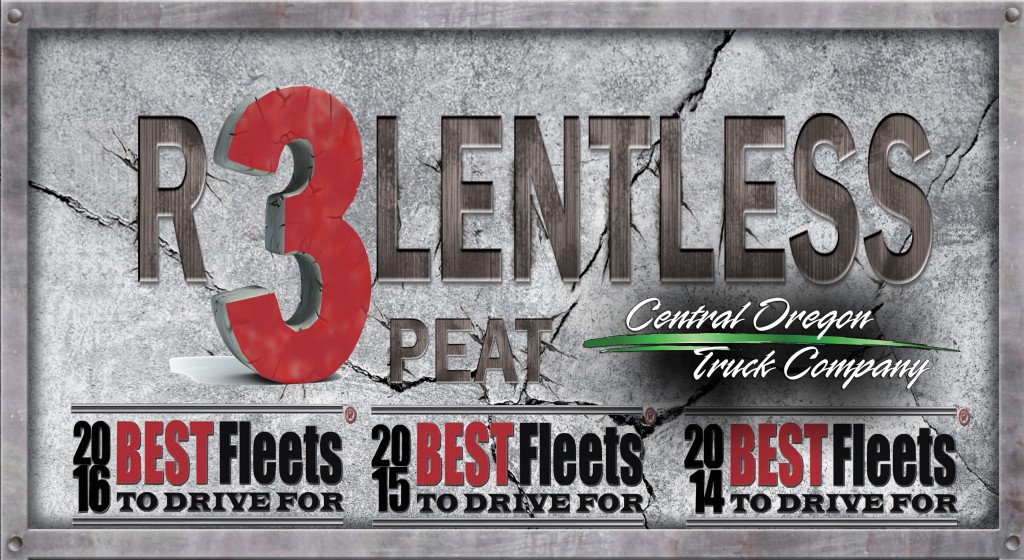 While COTC was the big winner amongst the Daseke companies, Boyd Bros. was chosen in the “Fleets to Watch” category, coming in the top 25 of all fleets. Smokey Point Distributing, WTI Transport, Bulldog Hiway Express and J. Grady Randolph were the other Daseke companies that placed in the finals.

“We were also extremely pleased that Smokey Point was a recognized safety winner,” said Daseke. “They were crowned as TCA’s safest fleet – coming in first place in the 15-24.99 million-mile division. This was on the heels of Smokey Point receiving its fifth consecutive Platinum Safety Award from Great West Casualty. SPD truly has a remarkable safety record; safety is top of mind for all our companies, and we’re proud of the Daseke record when it comes to the safe, on-time delivery of freight to our customers.” 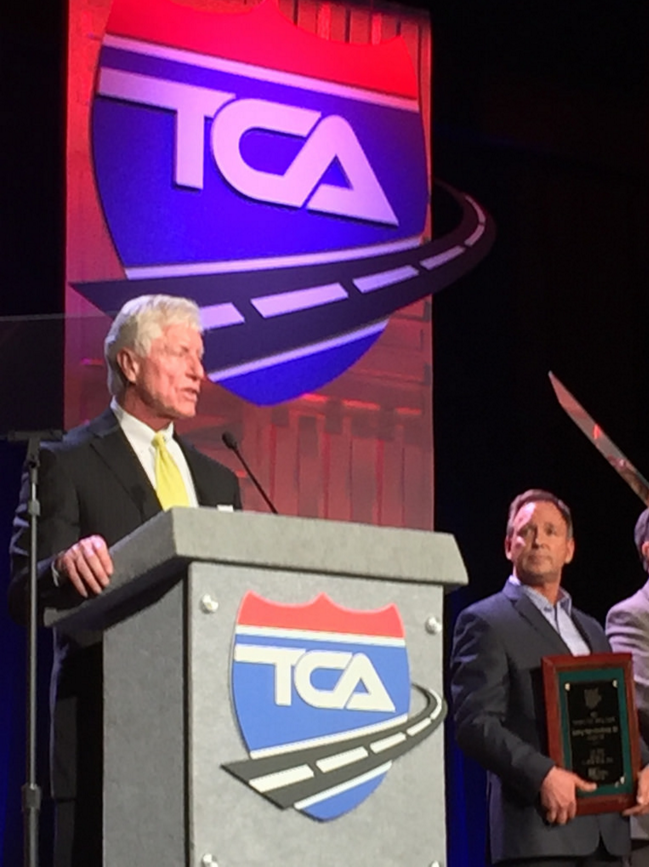 According to Cale Pearson, president of Central Oregon Truck Company, listening to drivers and implementing their suggestions have made a difference at the Redmond, Ore.-based company. 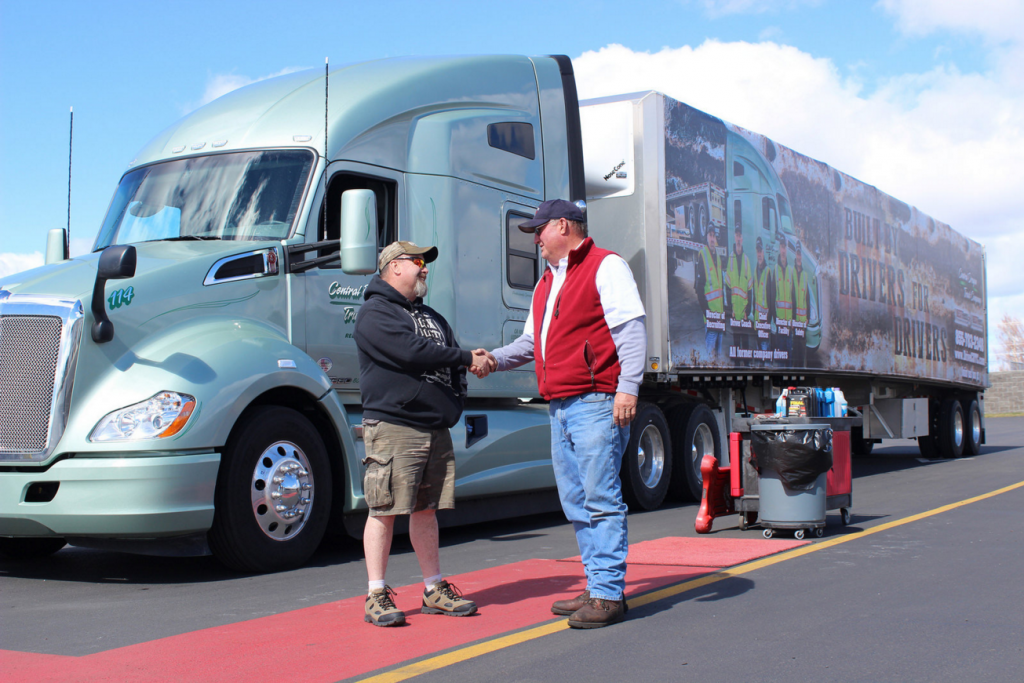 Central Oregon Truck Co. driver Carey Loseth, left, relies on Mike Gillaspie, a company driver concierge, to arrange cleaning, maintenance and other necessities for his company truck upon his return to the company’s headquarters in Redmond, Oregon. COTC’s driver concierge program is one of several reasons why the flatbed and specialty carrier was named by the Truckload Carriers Association for a third consecutive year as one of North America’s 20 Best Fleets to Drive For®.

“Since our company was founded by drivers, we’ve always had a ‘driver-first’ mentality,” he said. “Our driver retention rate has been going up every year and it really results from working closely with drivers. We implemented a driver concierge program this past year — when a driver comes into our facility, he’s immediately greeted and asked about the trip. But, it’s more than that … we ask if he’d like a meal … or if he wants us to get a shower ready. And we ask about any concerns on the tractor or trailer – so we can relay that back to our maintenance department. What we’re doing is giving time back to the driver. The concierge relays all work needs for both the driving team member and the needs of the truck to the necessary departments so the team member can reduce his downtime in the yard, take care of personal needs or just relax.” 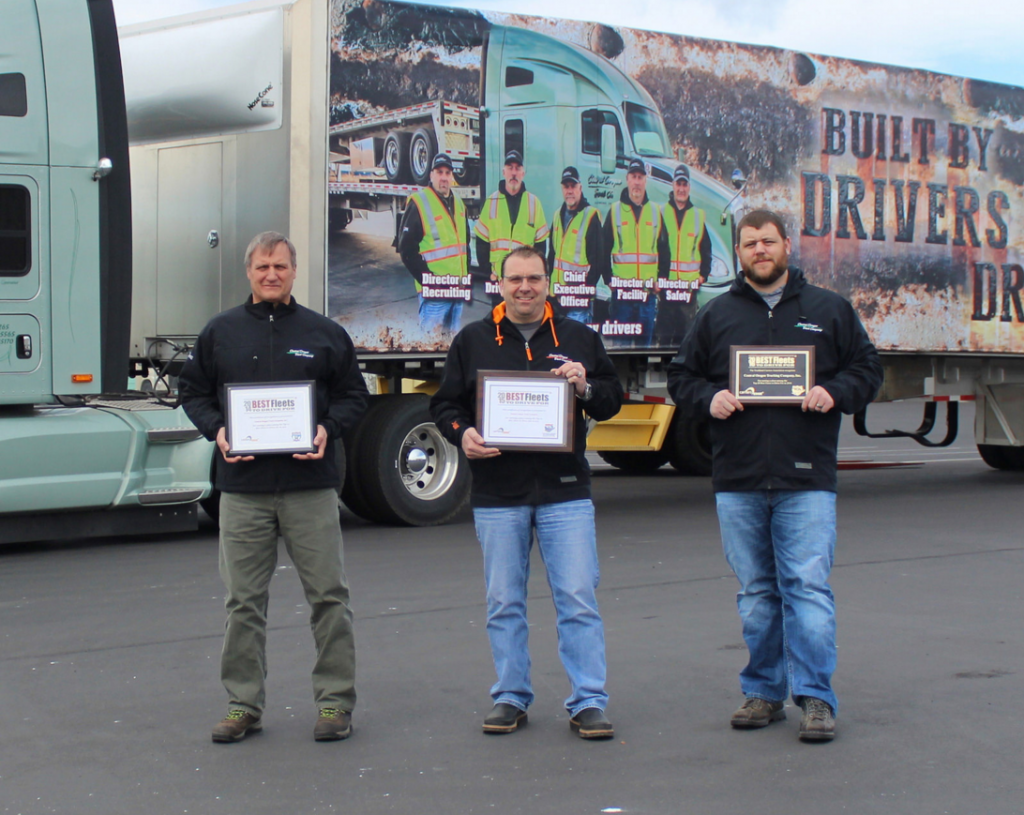 From left, Brad Aimone, director of driver safety and services for Central Oregon Truck Co. (COTC); Ron Brewster, COTC director of recruiting; and Luke Williams, COTC director of operations, proudly display COTC’s “Best Fleets to Drive For” awards from the Truckload Carriers Association for the last three years. COTC was named at the TCA annual conference in mid-March 2016 for the third consecutive year as one of North America’s 20 Best Fleets to Drive For®.

According to Don Daseke, all operating companies collaborate closely with each other and have monthly, if not more frequent, meetings to discuss best practices.

“We’re all joined together in wanting to improve and that’s what’s so exciting about our company,” he said. “Our CEOs all regularly collaborate with each other, as do our maintenance, finance, safety, operations, recruiting, sales, social media and HR teams. This allows each company to speak freely about what works, and perhaps what doesn’t. There are no secrets, and shared successes have become much more frequent. We have a desire to be the best, and the results we’re seeing show we’re continuing to move the bar higher.”