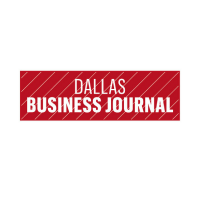 In choosing to go public, The executives of one of the fastest-growing companies in North Texas got the idea for their latest business move from a Twinkie. ¶ Hostess, the maker of the famous snack, executed what’s known today in Wall Street’s financial engineering rooms as a “SPAC”, or special purpose acquisition, to go public. ¶ The increasingly popular maneuver has become a way around a sparse market for initial public offering of stock. Instead of going it alone, Hostess merged with a special purpose acquisition company that used its cash to take the company public last year. ¶ The executives at flatbed trucking firm Daseke want to continue their long-term goal of consolidating the extremely fractured open-bed trucking industry even further. Additionally, upgrades to the country’s infrastructure, such as those proposed by President-Elect Donald Trump, could mean more business for the company. ¶ But Daseke needed the lower borrowing costs and the stature of a public company and saw what Hostess did as a way to pull it off. ¶ In December, the company agreed to merge with Hennessy Capital Acquisition Corp. in a $626 million deal to go public. ¶ The company’s CEO, Don Daseke, and Chief Financial Officer Scott Wheeler, both are former public servants of Addison, home to the company’s headquarters. Nearby there’s a bridge named after Wheeler. They point out what new roads and bridges may come, once rode — and will continue to ride — on the back of a truck. ¶ They expect more opportunities to add to the Daseke family of companies in the next three years and to double the value of the firm. Daseke and Wheeler recently sat down with the Dallas Business Journal to talk about the deal with Hennessy and the road ahead for the trucking business: 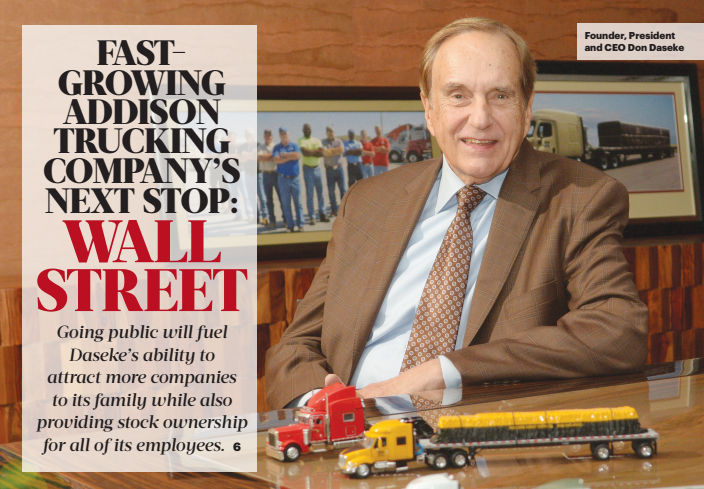 You dreamed of going public for a while. Why’d you do it this way?

WHEELER: We built the foundation to really accelerate and execute our strategy. And the one thing that was between us and achieving those strategies was achieving public company status. We got really lucky. It’s been a dire, horrible IPO market and if your objective is to become a public company, this idea of a SPAC, which back in the old days we used to call a blank-check IPO, just fast-tracked the IPO and with more certainty and execution. Because with IPO, well, what’s the price going to be? So, we have much more predictability with what’s going to happen here. 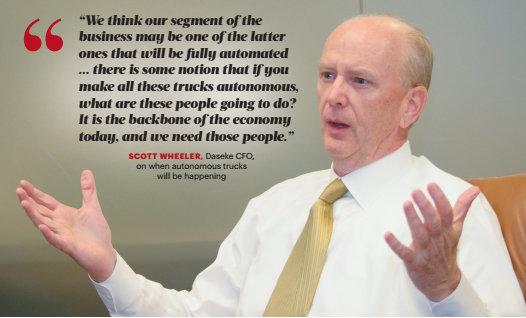 How did you get with Hennessy?

WHEELER: They have been awesome. They’re Industrial Investors. Dan Hennessy was a private equity investor focusing on industrial companies for a number of years. They come to us, and we’re a service company to industrial producers. We didn’t have to explain a lot of our world to them. They just naturally got it and went, “Oh, great.” So having that industrial mindset coupled with their adrolt skillset on Wall Street was just awesome.

DASEKE: We explained our strategy. We’re in this niche of the trucking business that only moves big things, heavy things, long things on flat beds. We explained that we’re the largest owner of open-deck equipment in the country but we only have a half a percent of the market. So, it’s a market ripe for consolidation and that’s what we’ve been doing. We’ve been adding these family companies for the last couple of years. We explained our strategy to continue to consolidate this market, but we were finding outstanding, well-managed – what we call – not-for-sale companies.

They’re not for sale. Then how do you get them to sell?

DASEKE: the traditional Wall Street approach hires an investment banker to go out and find companies that are for sale. Companies are for sale for various reasons. They’ve got financial issues. They’ve got management issues. They’ve got ownership that’s unhappy with them. There’s lots of issues for why companies are for sale. We said we don’t want those companies. We want companies that aren’t looking to exit. The owners want to stay around. But they want to plan a bigger platform by joining the Daseke family. I explained our niche to Dan Hennessy. And his last SPAC was Blue Bird, which is just school buses. That’s about as niche as you can get. So, he understood our strategy.

Do you think the human truck driver will eventually go away with the development of things like these self-driving cars?

WHEELER: Not for a long time. It will come. There will be more and more driver assisted technologies that come along, but that full notion of a fully autonomous truck is something that most of the analysts think will happen in the 2030s to 2040s. Now, if you could think up somebody getting on the interstate in West Fort Worth and putting on autopilot, then coming off autopilot as they exit in Abilene. Plus, what we do is a regular route and the freight itself is irregular. We have to have a driver to help manage the loading and unloading of the freight where you might not have to do that in a more traditional truck. So, we think our segment of the business may be one of the latter ones that will be fully automated. The number one job category in the United States of America is truck driver, so there is some notion that if you make all these trucks autonomous, what are these people going to do? It is the backbone of the economy today, and we need those people.

WHEELER: The electronic logging device (In the industry they call them ELDs). The vast majority of truck drivers keep their time – there are federally mandated sets of time you can drive at certain periods – in a paper log. Most large companies like us are on electronic logs, and the federal government has mandated that everyone shifts to an electronic log by the end of the year. That will be a very significant shift. If you said the guys who did paper logs stretch by 15 minutes here or 15 minutes there, you add that up over 1 million trucks a day. That’s a huge amount of capacity that comes out of the market, like that. That’s the thing that the industry is trying to get their arms around. These people are used to making a certain amount of money. Then all of a sudden they can’t drive this much. So, if they’re going to keep the drivers – and drivers are already in short supply – then their rates are going to have to go up because we have to pay these people more to keep them.

Do you expect the Trump administration to roll this back?

WHEELER: No. It is for the safety of everyone. There may be some regulations that were in the queue for 2018 and 2019 that might get pushed back. But that one’s coming. It’s already been court-challenged. It’s fully baked. It’s ready to go.

Is there any proposal you think is going to help?

DASEKE: And the construction equipment.

WHEELER: We move all of that. It’s what we do. It would be huge for us. So that’s the news out of the Trump administration that we had not anticipated.

This story was published in Dallas Business Journal on January 13, 2017.