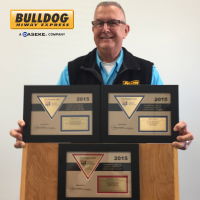 on November 9, 2016 in Bulldog Hiway Express

Bulldog, a Daseke company, took home first-place honors in the “general commodity/local haul” (up to 25 million miles) and “heavy haul – unlimited” categories. The company came in second in the “flatbed/line-haul” segment (up to 10 million miles).

“We couldn’t be more proud of what the Bulldog team accomplished this past year,” said Don Daseke, CEO of Daseke Inc. “The ATA safety awards recognize the absolute best companies when it comes to safety, and unquestionably Bulldog is at the forefront and an industry leader.”

In the two first-place awards Bulldog was accident-free.

“Our drivers are the winners,” said Jerry Peterson, safety director at Bulldog, who was at the convention to accept the awards. “Bulldog drivers were recognized for driving more than 11 million miles without a chargeable accident. That is a record we would hold up to any carrier in the country.”

Not surprisingly, Bulldog also excels in maintenance and vehicle compliance.

“There are very few carriers in the industry that can stand up to the CSA scores we have,” said Peterson. “We are very proud of the hard work our drivers have accomplished over the years to obtain the scores we’ve garnered.”

Since CSA scores are judged from 0 to 100, with zero being the best, the numbers Bulldog touts say a great deal about the company. “In vehicle maintenance, we have a 23 percent rating,” said Peterson. “In the segment, which measures all accidents, our rating is a very low 3 percent. In every other category, we have a 0 rating.”

The ATA award comes on the heels of Bulldog being recognized with top honors from the Specialized Carriers and Rigging Association’s (SC&RA). In May, the company won SC&RA’s 2016 Fleet Safety Award and Fleet Safety Zero Accident Award.

“Each honor we take home is an honor for our drivers — it’s their award,” said Peterson. “They navigate the daily challenges and have embraced our culture of safety first. Our drivers are our most important assets. It’s the safety of our drivers and the motoring public before all else.”

The Making of a Safety-First Carrier

Bulldog’s culture of safety is led by Phil Byrd, CEO, and Jerry Peterson, along with Chris Blackwell and Bob Lewin. Peterson, Blackwell and Lewin are all retired military, something not lost on Byrd.

“The training Jerry and his team received in the military is positively impacting everything we do here at Bulldog,” he said. “There is discipline, follow-through, accountability, professionalism and brotherhood among all our people. Things are done right and honorably, and it’s why our driver turnover rate in October was just 1.5 percent. On a yearly basis, we hover between 12 and 15 percent. Our average length of tenure here at Bulldog is more than 15 years. We respect our people; care for our people. We have an open-door policy. When I became president 25 years ago, I started handing out my business card with my home phone number to every new driver, so they can call me day or night if they have a problem or concern.” 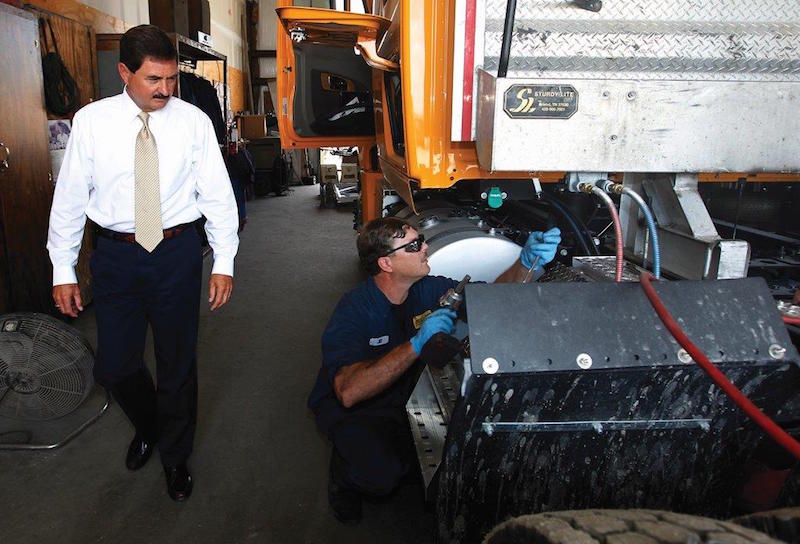 Not all drivers applying to Bulldog can make the grade.  Driving jobs are limited since turnover is so low. “And we’re very particular about who we hire. Drivers have to be a good fit for us and vice versa,” said Peterson.

Many of Bulldog’s drivers are entering the driving profession after a stint in the military. Peterson said more than 25 percent of Bulldog drivers have a military background. “Veterans Day is a huge event at Bulldog.”

“Once a driver is hired, we have an extensive orientation program, which includes safety,” added Peterson. “We utilize the Smith System on defensive driving.”

Not surprising, the system was developed by a military man — Harold Smith — in 1952.

“It’s a great program with five keys to becoming a safer driver,” said Peterson. “If there is ever a mishap, we can go back to the five keys and uncover what broke down. We feel the program is vital to our success.”

Also vital, according to Byrd and Peterson, are safety best practices and collaboration with sister Daseke companies.

“We have monthly meetings and share ideas on safety,” said Peterson. “All of the Daseke companies are zeroed in on safety, so it’s a common goal and point of interest. We’re all open to talking about new ideas and new technology that can improve our performance. Collaboration makes us all better. And better is safer.”