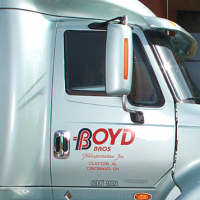 CLAYTON, Ala., Nov. 14, 2013 – Daseke Inc., of Addison, Texas, and Clayton, Ala.-based Boyd Bros. Transportation have announced a merger, creating one of the largest open-deck/specialty fleets in North America. The merger also includes the Boyd Companies –WTI Transport, based in Tuscaloosa, Ala.; Mid Seven Transportation, based in Des Moines, Iowa; and Boyd Logistics.

Combined with our other companies, which include Smokey Point Distributing, E.W. Wylie, J. Grady Randolph Inc., and Central Oregon Truck Company, more than 2,000 tractors and 3,600 trailers are available to our customers, said Don Daseke, President and CEO of Daseke Inc.

“The combination puts us well into the top five in open-deck/specialty carriers, in terms of vehicle count and revenues”

According to Gail Cooper, CEO of Boyd Bros., the vision of Daseke Inc. matches that of Boyd Bros. “First and foremost, we are true believers that people make the difference,” she said. “To be truly successful, you invest in people, and to that extent we share the same beliefs as Don, and the management of our sister companies in the Daseke family. We’ve always been a family business and have treated our employees and drivers right. It’s important to retain the family name, culture and the fiber in our legacy, which dates back to my father who started this business with his brothers in 1956. We at Boyd have high integrity with a solid moral compass. This led us to a partnership with Daseke Inc., which will strengthen all of us, while better serving our customers.”

According to Cooper, Boyd Bros. and its companies will remain intact with no personnel changes expected resulting from the merger.

Boyd Bros. and its companies serve the eastern two-thirds of the country and have service into Mexico with their trailers. “We’re especially strong east of the Rockies, and that dovetails nicely with our sister Daseke companies where their main strength is the central U.S., the West Coast, and into Canada,” said Chris Cooper. “This combination gives us true North American coverage – which we feel is best in the industry.”

“The team at Boyd Bros. is extremely sharp and progressive and is a great complement to the management of our Daseke carriers,” said Daseke. “Boyd Bros. has won numerous awards, from being honored with a ‘Best Places to Work’ award in the state of Alabama; to being named the Truckload Carrier Association’s overall ‘Best Fleet for Company Drivers’ award. Boyd Bros. was also named ‘Innovator of the Year’ by a major trade publication, and recognized for its safety record by the American Trucking Associations. They share the same operational values – safety and reliability of its fleet – plus the same family values as our other Daseke companies – it’s a great cultural match. We’re very honored to now be in business together.”

According to Bailey, growth at Boyd Bros. Transportation has been strong since the end of the Great Recession, and the added financial backing from being a Daseke company will accelerate growth even further. “This merger really creates a powerhouse in open-deck/specialty carriage,” Bailey said. “It gives us more capacity, in more geographical locations, with a greater diversity of equipment.”

Bailey also said Boyd’s Intermodal group, the first in the country to utilize specially-designed intermodal flatbed rail cars, could benefit other Daseke companies and their customers. “We unveiled this new way of transport in February of 2012,” said Bailey. “It’s a true testament to our innovation. This had never been done before. Rarely do you find a new way of transportation that has the potential to change an industry. This is one of them and we’ve been very proud to be in a leadership position.”

“What’s more, we have a very strong peer group of other Daseke companies that will help us develop best practices, plus harmonize our collective businesses and business strategies,” added Chris Cooper. “That, along with our own programs in place, such as utilizing the Four Disciplines of Execution – a quality program to ensure best performance – gives us a leg up on the competition. We’re building a world-class operation and we’re excited about joining forces with Daseke to further the collective vision of being the premier open-deck/specialty carrier in all of North America.”

“That’s the whole point of the merger,” agreed Scott Wheeler, Senior Vice President and Corporate CFO for Daseke Inc. “While our collective group of companies will be able to achieve cost savings through the merger, the greater opportunity is through driving top line growth,” he said. “We see very little customer or lane overlap. That’s by design and an accelerator for new business. We will be able to offer greater capacity, diversity of equipment, reliability and geography to shippers. What’s more, coupling Daseke’s existing logistics services with Boyd Logistics will give us greater opportunities to keep those shipments in-house, increasing our margins with no increase in cost to our customers. We think this is one of those special occasions where one plus one really does equal three.”

About Daseke Inc.:
Addison, Texas-based Daseke Inc. is a family of open-deck/specialty transportation companies serving 49 states, Canada and Mexico. The companies include Smokey Point Distributing, based in Arlington, Wash. (spdtrucking.com); the E.W. Wylie Corporation, based in West Fargo, N.D. (wylietrucking.com); J. Grady Randolph, based in Gaffney, S.C. (jgr-inc.com); Central Oregon Truck Company, based in Redmond, Ore. (centraloregontruck.com); and Boyd Bros. (boydbros.com); based in Clayton, Ala. E.W. Wylie is known for hauling heavy equipment, both open-deck and specialty. Smokey Point is a leader in aviation-related transportation with a highly diverse trailer fleet featuring a large inventory of curtain trailers in open-deck, step-deck and low-profile step-deck configurations. J. Grady Randolph is an expert in over-dimensional open-deck cargo. Central Oregon Truck Company handles a variety of open-deck loads and offers curtain trailers and roll-tops. Boyd Bros. and its companies offer high volume, time-sensitive open-deck/specialty services. Together, the companies comprise one of the five largest specialty and flatbed carriers in North America.