You are here: Home › News › Daseke › Daseke Featured as a “Fab Four” Company by Addison Magazine

Approved for reprint by ADDISON – The Magazine of the North Dallas Corridor.

Transporting the country’s high-tech equipment and heaviest machinery requires a specialist to handle the load. Daseke Inc. and its family of trucking companies have moved wind turbines across Texas, a Triton submarine 3,000 miles cross-country and the I-beams used in shaping the New England Patriots’ Gillette Stadium. 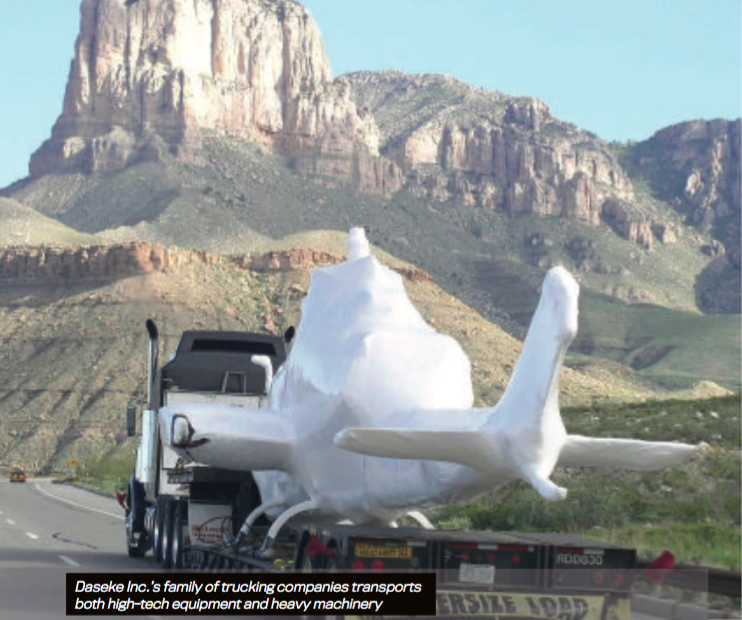 Don Daseke acquired his first trucking company, Washington-based Smokey Point Distributing, through a casual conversation with his investment banker in 2008. Daseke examined the growth potential and the untapped specialty market handling flatbed, heavy haul and oversized loads amid the highly competitive trucking industry and made his bid.

With the addition of Daseke’s second purchase, North Dakota’s E.W. Wylie, came the formulation of the business’ objective: to be the country’s premier flatbed carrier. After seven years in the industry and nine total trucking companies, Daseke Inc. has become the owner of the nation’s largest flatbed, open and specialty truck fleet.

Daseke knows when to put his hands in a project and when to pull away. His previous ventures include Walden Residential Properties, which he drove through the tumultuous ’70s and ’80s real estate markets and the late-century Sage Telecom. Both ventures have since been sold, allowing the builder of businesses to concentrate on the trucking industry.

On board with Daseke is former Addison Mayor Scott Wheeler. As executive vice president and chief financial officer, Wheeler’s garnered considerable attention in the industry and the business community, receiving several accolades for his financial and management acumen. No stranger to the political arena himself, Daseke sat on the town’s council from 2009 to 2011 and occupied the seat as mayor pro tem in 2010. 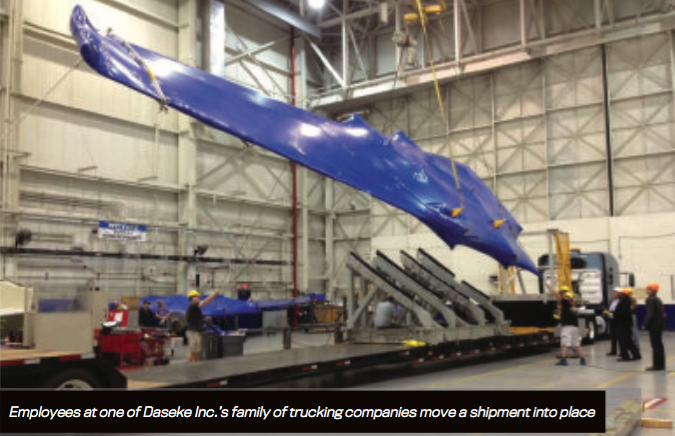 With Wheeler behind Daseke and 14 of his closest associates occupying offices inside Millennium Tower, they approach the industry from a mentoring perspective. The trucking companies remain intact. Special equipment requires special permits and logisticians to expedite routing. Contacts made within each state’s traffic department handle oversized loads, coordination with drop-deck and double drop-deck trailers, a network of resources to deter road hazards and escorts to traverse roadway exchanges. Daseke’s hands-off approach allows the experienced trucking companies to drive the daily workload.

Whereas the conventional practice for the business model is to buy out and terminate the staff, Daseke found a more favorable practice in keeping those knowledgeable of the industry at the company helm. This practice leads to a quarterly Collaboration Day, allowing an exchange of ideas that prove formidable for staff sustainability, maintenance and teamwork. Where one outfit may have knowledge of recruiting and keeping drivers, another company fills in the gaps on rig maintenance.

Taking notice in the industry trend, The Journal of Commerce listed Daseke as 2015’s fastest growing carrier. Its revenue climbed 157 percent in 2014 with growth attributed to the firm’s mergers, mentoring and management practices.

Showing no signs of slowing down, Daseke has accelerated into 2016 holding its position as the nation’s largest specialty carrier, while another Addison fleet exemplifies growth door-to-door.